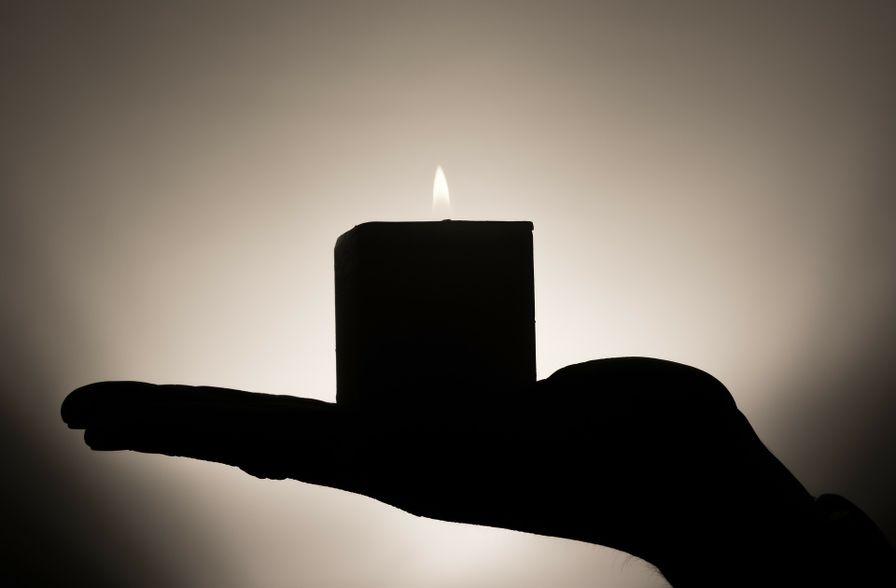 Once the lift reached the floor below we exited, and I remember blindly following the strange procession down a number of corridors with little idea of the direction we were going in. Eventually we stopped, seemingly in the middle of the darkened corridor. I wondered why, until the Irish doctor came over and told me that the scanning department was not yet open as we were still waiting on the on-call radiographer to arrive. We were literally standing in the hallway outside the door to radiography, waiting for a member of staff with a key and the knowledge to work the scanner.

It felt desperately wrong to have to stand and wait when Marc's life was hanging in the balance and the scan could provide the answer to what was actually wrong with him. The doctor and Claire kept on reassuring me that it wouldn't be long, and I think it was only a matter of a few minutes before Marc was able to be wheeled into radiography for the scan which I was hanging all my hopes on. At that point, Claire told me that the scan would not take long, but that I couldn't go into the scanning room with Marc due to the risk of exposure to the harmful X-rays. Instead, she suggested, she would take me up to ITU to wait for Marc, as that was where he was headed after the scan had taken place.

I was reluctant to leave him really but, unsure of what else I could do, I went with her. By this point Marc seemed barely conscious that I was by his side and I understood that I wasn't allowed near the scanner. It didn't seem like I could be of much support to Marc anyway at this point and I was desperate to contact both Marc's mum and my own parents to fill them in, as I knew that they would all be worried sick. I felt very responsible for keeping them updated, and guilty that I had not called them the instant I got to the hospital. I was unsure of what I was going to tell them, but felt that at least I could call or text them from outside Intensive Care with some kind of update.

I told Marc where I was going (with no real idea of whether or not he took it in) and walked away, following Claire down another maze of shadowy corridors and up a flight of stairs until we reached ITU. The next day I had no recollection of where it was located, so I must literally have plodded after Claire, paying scant attention to the direction we were taking. On the way, she explained again that Marc would be brought straight up to ITU once the scan was complete, but that it might take a little time to 'settle him in' so I needed to be patient. She showed me into the waiting room, a room I would come to detest intensely, and I think she brought me a cup of tea from a machine. She introduced me to the ward sister on duty ITU that night, who was called Lesley. I remember several conversations with her that night and am unsure of their order really, but I think initially she just told me her name and reassured me that, once Marc arrived, they would do their best to keep me fully updated on his progress.

Preparing for the worst

I know she repeatedly told me how ill Marc was, even before having met him. I presume she had been briefed on the state of the man that was coming into ITU that night, and I believe that she was preparing me for the worst. Once she had introduced herself and she and Claire had checked that I understood what was going on, they left me for a while with my plastic cup of tea and my thoughts.

The waiting room in Intensive Care is one of the worst places on earth. No joke. Over the next few months I was to spend far too much time there and although it can appear different depending on the time of day or night, it is always a tense, unhappy place. No one is placed in Intensive Care unless they are fairly seriously ill or recovering from an operation where they need certain crucial drugs that can only be administered in the ITU environment. The Intensive Care ward is constantly air conditioned, which is nothing like other hospital wards where it can be stiflingly humid. These air conditioning units are housed in cupboards in the waiting room area of ITU. They throw out heat constantly, so the room is always unbearably hot.

That night the waiting room was empty. I felt extremely hot, dizzy and quite sick. Sitting alone, I had a little time to process what was happening and consider myself for a moment. I really didn't feel at all well. I remember trying to lie down on some of the easy chairs in there (none of your plastic, hard-backed chairs in ITU) and covering myself with my coat. Sitting perfectly still in once place. Standing at the one small window, staring out and trying to gasp at some fresh air. My stomach was churning and nothing I did seemed to stop it. I began to believe that I was coming down with the same mystery illness that Marc had: it was a few days later, I thought logically, I had been caring for him for the past few days. I could realistically have contracted the illness and be just starting with the same symptoms.

This was the thought process I followed, and once I did, I couldn't get it out of my mind: I have the same illness. Marc is going to die. After that, I will get worse and I will die too. Who will look after our children when we are both dead?

I was obviously in shock. Considering the situation rationally, all of the symptoms I was suffering from could be easily attributed to the overwhelming stress of what was happening. The room was hot and was making me sweat. I was dizzy through lack of sleep and the hot atmosphere. I felt sick and my stomach was churning because I was frightened, the same way you would be before going for a job interview or sitting an exam, just multiplied by a thousand.

Looking back, it makes perfect sense why I felt the way I did, but at the time I sat there, terrified that our children were going to be left parentless; that we didn't have an up-to-date will which would instruct anyone what our wishes were; that I would never get to see them grow up. Writing this now it seems melodramatic, and I wish I had shared my worries with someone, as they might have been able to give me some reassurance that it was extremely unlikely that I had the same illness as Marc. Instead I sat and stewed for I don't know how long, and waited for Marc to come back up from radiography.

I called Marc's mum and updated her, feeling guilty and desperately sad that I didn't have more positive news. I called my mum, or perhaps she called me, and we agreed that she and Dad would drive to the house where she would stay and babysit and Dad would bring Marc's mum to the hospital, as she should be here too. It was her son whose life was in danger after all.

Once those calls were made, I busied myself emailing work, explaining that I would not be in the next day, and instructing my colleagues what tasks to set for my classes. Again, the word 'surreal' comes to mind. Sitting planning lessons on 'Of Mice and Men' and descriptive writing while my husband's life hung in the balance seems ridiculous, but I was alone for a long time in that waiting room, and sending the emails gave me something to occupy my mind and stop the terror from taking over. I also called the work cover line, which I knew was a recorded message, and and explained why I would not be in the next day. I can't imagine what I said. I'm certain the cover supervisor was surprised by the message the next morning. In amongst the usual 'tummy bugs' and 'flu' preventing teachers from coming in, a message at 3.30am stating that a staff member would not be in due to her husband's hospital emergency must have come as quite a shock.

After that there was little more to do than wait. Wait for Marc to come up from his scan, desperately hoping for some kind of answer. Wait for my dad to appear with Marc's mum to reassure me. Wait for the night to be over, with some kind of resolution to the hell I found myself in.

Trauma in the early hours

This must have been a desperately low point for you. I can't imagine what you were going through xx

It really was Sue. I don't think there has been a worse time in my entire life. Thankfully I was ok, and so was Marc (in the end). It didn't stop that night from being utterly horrendous.

What a nightmare! Can really get a sense of your thoughts and feelings so openly shared!

Thank you Pauline. I was extremely frightened that night. Thankfully there was nothing wrong with me other than shock and exhaustion. And things improved (eventually).