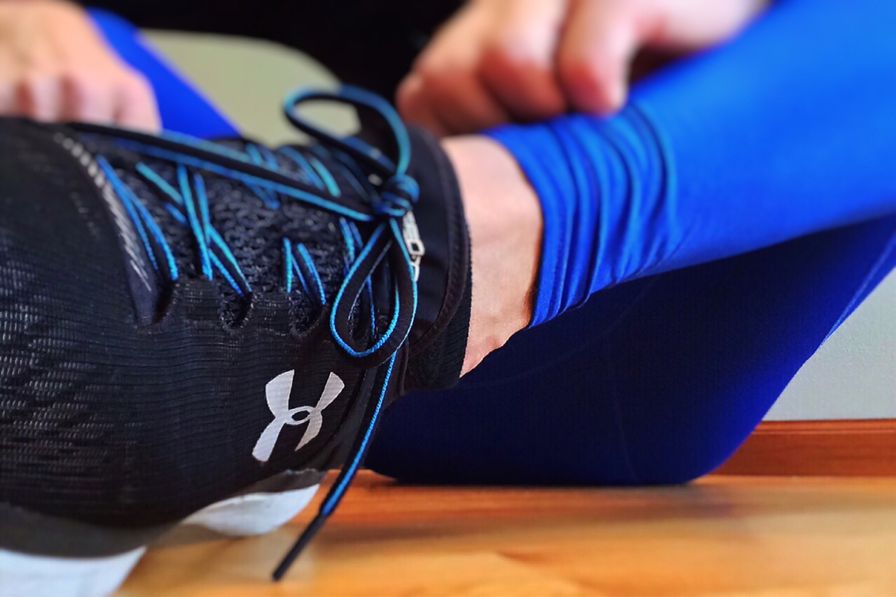 Fitness and weight have played an important role throughout Marc's period of illness. Before he became ill, he was 42 and had begun training for a half marathon, probably a nod to the 'mid-life crisis' turning 40 can bring on. He had felt the need, upon reaching that momentous age, to get fitter and set himself a new and challenging goal. The English Half Marathon was set to take place in Warrington in September 2014, and Marc had signed up to run it, along with a couple of friends, the previous November. He had spent much of the darkest months of winter 2013-14 training in the evenings, and by spring he was running distances of up to 7 or 8 miles. He was, justifiably, proud of himself and well on track to achieve the 13 mile distance he planned to run in the autumn.

When he ended up in hospital, several of the doctors commented on how much of his survival was down to his fitness levels. That someone with the same illness but a higher resting heart rate and carrying more weight would not have stood the same chance, and might not have pulled through as Marc had. It certainly made me think about my own health. Could I honestly say that I was that fit? That, should I contract a sudden and mysterious illness, my body was strong and healthy enough to fight it off?

Difficult to look at

When he entered hospital on 23rd June 2014, Marc weighed around 80 kilograms, or 12 stone 8 pounds. This is not a huge weight anyway, for a man who is 1.9 metres tall, or 6 foot 2. During his hospital stay, losing muscle mass by the day and being fed for the most part by tube up his nose, he lost around 19 kilos, or 3 stone. When he left hospital (and believe me I do not say this lightly), he looked like someone who had come out of a concentration camp: his ribs sticking painfully out from his chest, his skin hanging off him in folds, his arms frail and weak. My first thought when he came home and I saw him without all the bedsheets and covers which had masked his condition for three long months in hospital, was that he had become an old man, wizened and skinny. In truth I found it difficult to look at him without clothing, feeling close to tears whenever I did.

Eating was a major problem from the moment he entered hospital. Fed nasally to begin with, his traumatised stomach eventually began to digest the liquid food being dripped into it, and the nurses taking care of him remarked to me that, slowly, he was becoming more able to tolerate it. Each day they painstakingly recorded the amount which was being absorbed by his gut: tiny, tiny amounts to begin with, and increased the amount of feed being administered accordingly. Several times an optimistic nurse upped the amount too high too quickly, and it had to be reduced again in order to allow his stomach to begin coping again, with only the very smallest increases possible to begin with.

If I have learned anything from Marc's illness, it is that recovering from a major trauma or illness takes time. So much time. I didn't expect that it would happen overnight, but I massively underestimated how long it would take every part of his body to return to something like normal. Everything his body had to do in the recovery process happened slowly, and if we tried to rush or fast forward things, we often found ourselves being set back further than we had been in the beginning. His digestive system was one of the things which took the longest to settle down. Even now he has a far smaller appetite than he ever had in the old days, pre-illness. Eating out can be a challenge, as he can't manage massive meals any more: starters and puddings are a thing of the past: he rarely has anything other than a main meal these days, which he often does not finish.

But his weight loss was such a major issue, to me at least, that once he was home from hospital I tried to force-feed or persuade him to eat every sort of fatty food available. We saw dieticians, who had little advice other than to load his food with cream, full-fat milk, sugar, and take dietary supplements. Most of these only made him sick, or reminded him of the unpleasant time he had spent in hospital, bringing back very negative memories of throwing up every time he had one.

It sounds ridiculous, but I spent a good few months being completely paranoid that Marc would die of starvation, or have to receive food through a tube for the rest of his life, he was sick so often. I would watch him eat a meal and then sit, observing him carefully, quizzing him about how his stomach was coping with the food he had just consumed, and then feel a fresh devastation come over me when he headed to the bathroom and I knew he would not keep the food in his stomach.

I despaired of him ever managing to eat a normal meal, of his stomach and bowel functioning correctly enough that he could consume food and keep it in his system long enough to absorb the nutrients and begin to put on weight. Looking back, it was ridiculous. I was so desperate for him to return to normal, and eating is such a necessity for life, that I probably pressured him into consuming more food than he was able, thus making his stomach more likely to reject its contents and continuing the vicious cycle which I had set in motion.

Desperate to return to normal

It didn't do our mental health or relationship any good either, as he regularly tried to eat more than he could manage, probably partly to please me, and I sometimes even felt angry with him for not managing to keep the food down, even while I was perfectly well aware that it was not his own fault and that he wanted to put the weight back on and return to normal just as much as me.

And none of the medical staff we saw seemed to have an answer. There is plenty of advice out there on how to lose weight, but very little about how to successfully put it on. Any advice there is focuses on eating larger portions and adding more fat and protein to your diet, which was no good to Marc, as the volume of food he could tolerate was so small, and adding to it only exacerbated the issue.

In the end, I have come to realise, the solution was time. Eating small amounts fairly often; adjusting to how much his stomach could manage and not exceeding that amount; gradually increasing the volume of food he ate in infinitesimally small amounts; trying to make sure that what he did eat was high in fat and protein content: these were the ways he managed to increase his food intake and therefore his weight.  It as definitely goodbye to salad and vegetables for the time being!

Meanwhile, I was losing weight through worry. I somehow believed that weight loss through stress was almost a fallacy, that it wouldn't happen to me. I was so wrong. I took up running, a sport I used to despise, and found that it did wonders for my mental health. I didn't run far, and I will never run competitively, but just escaping for twenty minutes allowed me to clear my head and destress a little. I found that once I got going (I'm not very fast but can do distances without stopping at a fair pace) and was out of breath and tired, all I could concentrate on was running and breathing, which was fantastic. I also found that thinking things through outdoors, without anyone else to worry about, was really freeing.

Between the running, which was very good for me, and eating less than perhaps I should have done, I began to lose weight. I didn't notice at first, and I certainly never got to a worryingly low weight, but I definitely began to notice a difference when I went back to work in the September and my suit trousers almost fell down! Weirdly, it was nice to lose a little weight (I had probably been a little heavier than I should have been) and I certainly got a lot of compliments.

But at least one person pointed out to me that my weight loss was not really a good thing, as it meant that I wasn't eating well. I am certainly immensely grateful that Marc's situation began to improve when it did, because a prolonged period of time grabbing snacks and half-eaten meals, unfinished because of time pressures or because I was too worried to eat any more, would possibly have left me at a weight which was dangerous.

As for Marc, he came out of hospital on Thursday September 18th 2014. The English Half Marathon took place around Warrington on the following Sunday, and he was immensely proud that one of his very first outings after coming home, in a wheelchair and still extremely weak, was to cheer on the friends who he should have been running with. He had, in effect, run his own 'marathon' and to be out of hospital, back at home with his family after his long and arduous struggle to recover, was a major triumph in itself.

I completely empathise with the lack of advice available about putting on weight. I've always struggled with being underweight and all I was ever told was to eat fatty stuff but foods like that can leave you feeling lethargic so it was an uphill struggle! Little and often does seem to be the way but it is slow going! And no one sympathises with having to put on weight many people assume being underweight is a good thing but it can, as you've pointed out, be just as dangerous as being overweight. Marc and I would make good dinner companions sounds like we are fellow small plate'ers 😃 xx

You have had to be so patient as Marc,s progress was so very slow, it must have been a very anxious time for you.when Marc came out of hospital i cant believe how amazingly well he has done.x

What a terrible ordeal! The relief at having Marc home was understandably soon replaced by anxiety about looking after him without medical support. Great to see you both looking so fit and well now!